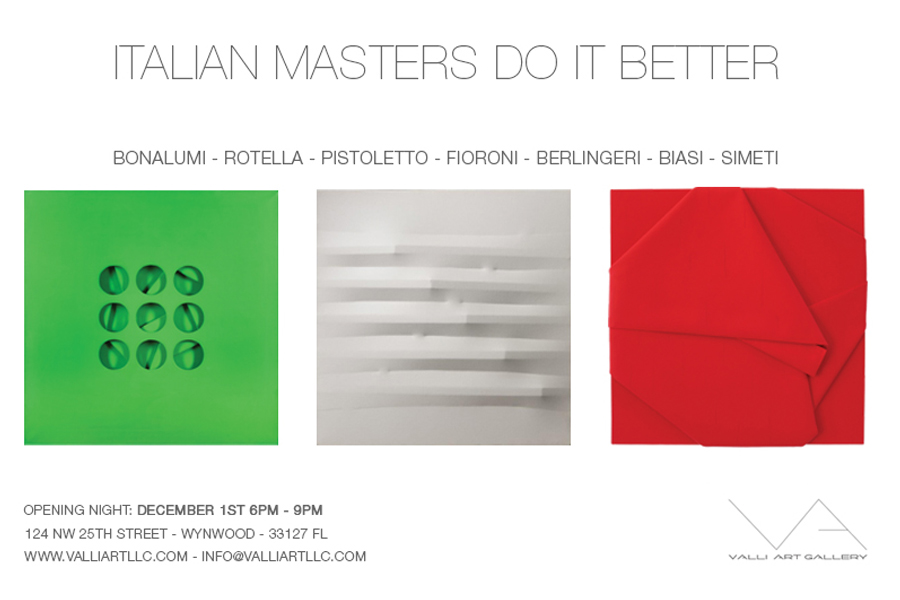 We selected ITALIAN MASTERS DO IT BETTER as the title of the exhibition on the great contemporary Italian artists that founded and influenced important internationally celebrated art movements in the 1950’s, 60’s and 70’s through the year 2000 and onwards, because we wish to point out the excellent unique creativity of these masters, and officially introduce their artworks in the United States of America during this millennium. The American public is familiar with the excellence of Italian creativity in contemporary design, fashion, food, the automotive industry, music, literature, as well as in Italian Classic Art masters like Leonardo, Michelangelo or Rafael, but somehow only the in-depth contemporary art connoisseurs know that Alberto Biasi was exhibited and widely celebrated at the Venice Biennial and at New York MoMA in the middle of the last century as one of the founders of the international kinetic movement. In addition to kinetic master Alberto Biasi, the exquisite group of artists for our first exhibition ITALIAN MASTERS DO IT BETTER includes Agostino Bonalumi and Enrico Castellani, who are among the most celebrated creators and founders of the Spatialism movement, as well as the Sicilian artist Turi Simeti that in 1965, Fontana involved in the exhibit Zero Avantgarde at his Milanese studio. Moving towards the precursors that in the past century leaded to the development of new contemporary movements within the figurative art scene, a section of the show is dedicated to Mimmo Rotella and Giosetta Fioroni, who respectively expressed their creativity introducing the Nouveaux Realisme and POP ideas, greatly developed in the USA during the 60’s to the 80’s by Andy Warhol, who made POP Art an iconic movement. The exhibition also shows unique artworks by Spatialism’s heirs, Giuseppe Amadio and Cesare Berlingeri, who made volumetrical interventions with monocrome canvas that changed art history, building on it unexpected abstract spaces fulfilled by intellectual statements on visual philosophy. The presence of the important work by Michelangelo Pistoletto, complements the grand welcome that VALLI ART Gallery has created a for the arrival to the United States of America of these significant Italian Contemporary Artworks.

Copyright 2017 | All Rights Reserved
Back To Top
×