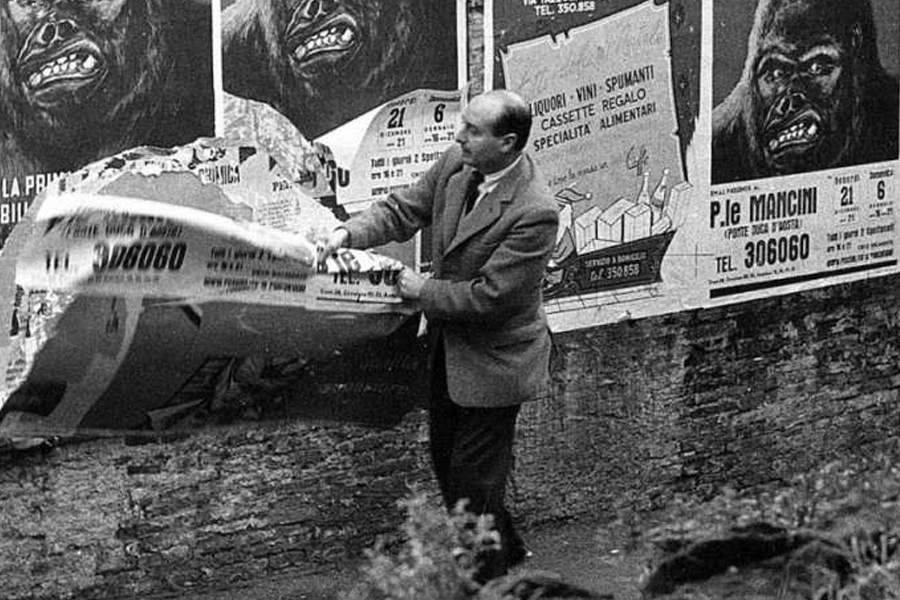 Mimmo Rotella, who has died aged 87, was an Italian Pop artist who drew heavily on film imagery from the 1950s and 60s: like Andy Warhol, he was fascinated by Marilyn Monroe and Elvis.

By Christopher Masters at The Guardian

Unlike his American counterpart, however, he relished the physical processes of making art, creating so-called décollages by tearing layers of film posters stuck on canvas to recreate the appearance of peeling billboards. Nothing could evoke more potently the ephemeral glamour of the modern city.

Rotella was born in the Calabrian town of Catanzaro, where his mother was a milliner. As a boy, he befriended the local painter of cinema advertisements before enrolling at the Accademia di Belle Arti in Naples. The war disrupted his education, though gastric trouble prevented him from fighting. In 1944 he returned to Naples to finish his training, before moving to Rome, where he began to paint in an expressive abstract style.

During this period, he supported himself with a series of miscellaneous jobs, culminating in 1949 with the decoration of post office facades in Catanzaro and the alpine town of Cuneo. But his most significant achievement was the award, in 1951, of a Fulbright scholarship to the University of Missouri. As well as exhibiting at the Rockhill Nelson Gallery in Kansas City, he travelled the country with his experimental poetry, a strange mélange of whistles, numbers and onomatopoeic sounds, which he recited to wild applause.

After such excitement, Rotella’s homecoming was inevitably an anticlimax. Eventually, however, he found inspiration in the dilapidated billboards of Piazza del Popolo, close to his studio in Rome. Their influence combined with the example of American abstract expressionism to produce the ripped, roughly textured décollages for which he became internationally known.

Initially, these fragmentary, disorientating images were like physical manifestations of Rotella’s poetry, dominated by arbitrary juxtapositions of words and numerals. From 1958, however, recognisable subjects – the stars of American and Italian films – began to appear, which inevitably cast Rotella as a pioneer of European Pop art. He also began to mock the commercialism of “high” culture, turning an oil-can into art simply by replacing the brand name with his own personal logo.

At the time his most obvious important links were with the French movement Nouveau Réalisme, with whom he first exhibited in 1961. In contrast to Jean Tinguely’s junk sculptures or Yves Klein’s audacious use of flame-throwers and paint-smeared naked girls, Rotella’s posters seem fairly restrained. But they attracted sufficient attention to encourage him in 1964 to settle in Paris, which remained his home until he moved to Milan in 1980.

It was just before his move to France that Rotella developed a technique in which press photographs were projected on to canvases covered with a light-sensitive emulsion. These reportages reflected the morbid voyeurism of contemporary society. Instead of Anita Ekberg in the Trevi fountain, he now chose altogether darker themes: the funeral of Pope John XXIII and the assassination of President Kennedy.

This is not to say that Rotella’s private life became less hedonistic. He embraced the permissiveness of the 60s enthusiastically; in 1964, he was briefly jailed for drug possession. His sexual peccadillos – “many thought I was sick and that my tastes were strange” – are described candidly in his autobiography, Autorotella (1972).

His art of this period, often based on enlarged Polaroids, is rarely as alluring as his early work. It was only in the 1980s that he returned to making décollages, in which the sensation of multiple layers was enhanced by partly covering the image in paint. The old motifs – characters from La Dolce Vita, the smiling face of Marilyn – reappear, together with fragments torn from advertisements: a fetishistic fantasy of ice skates, lingerie and fishnet stockings.

Certainly, age did not diminish Rotella’s energy and flair. In 1986, he gave flamboyant poster-stripping performances in Havana, dressed as a colonial officer or a fighter pilot. Meanwhile, he was feted at more conventional venues, such as the Venice Biennale, where he cut a distinctive figure with his Hawaiian shirt, dark glasses, cigar and panama hat. Throughout his 70s and 80s, he continued to create provocative images of cultural icons ranging from Rita Hayworth to symbols of ancient Rome. He is survived by his wife, the Russian economist Inna Agarounova, whom he married in 1991, and their daughter, Asya.